What my C-Section Scar Taught Me 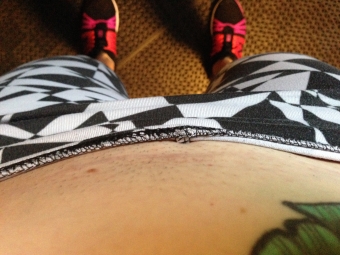 That's how long it took for the feeling to come back over my scar, the numbness to disappear, and the angry redness to be gone.

My scar was supposed to be a "battle wound" or some say a "precious reminder" of the amazing life I birthed.

But for 2 years and 8 months, I have to be honest.

I looked at that scar and felt emotions that I'm not sure I can put into words.

I felt like screaming at the top of my lungs so loud that the vessels in my eyes might burst.

I felt like punching a wall and then curling up in a corner and crying,

But of course, I wouldn't want anyone to see.

I wouldn't want anyone to see the shame, or guilt, or the emotions of real life.

I felt like that scar proved that I was a failure as a mother.

So why is it that other women can have planned C-sections, or even emergency sections, and not feel the same as me?

I now know why.

Some women who struggle with infertility probably want to throat punch me right now, because they would do anything to conceive and just have a baby.

I do not minimize their struggle or even say that I can relate,

But I now know WHY I FEEL the WAY I FEEL.

I fought so hard to NOT have a C-section, not only because I knew it was possible the other way, but also because I didn't want to be anything like my own mother.

My mother who had 2 C-sections with my brother and myself.

Growing up with a mom who constantly criticized me was maddening.

I don't blame my parents and I don't say this to throw them under the bus,

But as a family, we lived a life based on IMAGE

According to Gabrielle Bernstein in her book, Adding More ~ING to your Life,

"Unhealed feelings from the past block your authentic happiness."

It's so fucking true.

For 2 years and 8 months, I couldn't quite place WHY I could never feel true authentic happiness as a parent.

Why I couldn't look at Oliver, my newborn baby, and now a SMART, KIND, HAPPY, FEARLESS toddler, and not feel FULL SUSTAINED JOY.

I was so worried about him hitting his milestones, and playing nice with others, that the anxiety that I felt TOOK OVER.

The GUILT that I felt. TOOK OVER.

You see, that cut ran SO DEEP FOR ME.

"Once you allow yourself to feel, you can then surrender to the healing process."

Her Feeling equation guides you to pour some peroxide onto the past wounds.....

"A quick sting to then set the healing process in motion, the gaping wound becomes a scab, and within weeks (or 2 years and a few months for me) its pink new skin. A gentle reminder of an old lesson."

In order to SAVE MY SANITY I had to start to FEEL.

I had to be angry at the providers who treated me poorly around his birth,

But then I had to FORGIVE.

I HAD TO FORGIVE to be a better mom.

I had to put my hand on my heart and tap into unconditional LOVE,

And I had to allow Oliver to make mistakes.

To face plant at the park, and be a difficult toddler.

To express himself how he wants to, but still hold true to the integrity and values of our family.

To not get angry, but to sit beside him and meet him where he's at.

Don't get me wrong. I don't want to raise a little entitled, ungrateful, everyone gets a participation prize kind of kid, but I had to UNTIE myself from the outcome.

I had to STOP BLAMING myself when he slapped us in public, or threw himself on the ground in the middle of TARGET, or wouldn't share his toys, or refused to get dressed.

I DON'T have a perfect KID. And neither do you.

I have a smart, funny, kind, loving, and well mannered kid, and yes, we parented him that way, but he also is stepping into his own personality.

He is becoming the person he is today, because we teach him right vs. wrong, love with no boundaries, and laughing and dancing for no reason other than to feel pure joy.

I had to UNPACK the PAST, but then move on.

The day of my son's birth has no bearing on who is he today, or the mom that I am.

So now I look at that scar.

And it's JUST A SCAR.

It's just a bookmark and a page in my book.

It's no longer a reminder of my childhood,

A reminder of my mom,

A reminder of the nurses and doctors who did me wrong,

A reminder of my mistakes.

*To learn more about how I started to speak kinder to myself, and how I overcame that fear of not being perfect, you can pick up my free article HERE.*