The Curse of "I Already Know That" 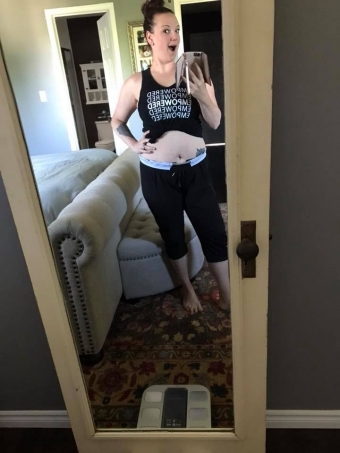 I've been an emotional eater for pretty much as long as I can remember.

Acting out of impulse and fear.

No one wants to raise their hand and own up to that fact that they can't handle their emotions,

Ask for help? Admit that I don't have it all together!

But why the hell shouldn't we?

We aren't weak, or crazy, or needy.

And some days we feel alone in our struggle.

What you see on the cover of magazines and through the Instagram filters are NOT everyday reality.

And covering it up, or stuffing it down, doesn't get to the root,

History will replay itself.

Or at least, that's what I believe.

I caught myself saying the deadly phrase, "I already know that" last week.

"I won't learn anything new, " when the largest fitness company that I've aligned with released a mindset program.

What the hell is that?

Exercise is extra credit. There is no weighing of food, eating out of color coded containers, or counting calories.

This approach was VERY different from my heavy weight, macro loving, disciplined structure that helped me lose over 100lbs.

I wrote it off as "another fad, low carb or high fat, restrictive fling" that I didn't want to partake in.

But then my online accountability group of 40 started posting about their success.

They went and bought the program, dug in, and started saying how much they loved it.

One of the principles is "positive people, positive weight loss."

I really realized the strength in numbers and that my group helped me see through the fog.

I usually close out my groups after each challenge, but for some reason, this group is special.

We're like a family and we've been running together since January.

So I decided to dig into the program for myself.

The truth is, there really wasn't too much that I didn't already know.

As a nurse, trainer, macro coach, and fitness nutrition specialist, I've probably done more research on food that most.

But the way it's laid out, the guiding questions, the sequence of how to take action, it works!

So instead of saying " I already know that."

I decided to trust the process.

I'm down 9lbs in about 2 weeks and it's so simple to apply. It really is mindset work.

Fix your mind and the game changes.

Or you feel like it won't work for you,

Or you feel like you've already tried it all,

If you're ready to make some real change and release weight,

Learn more about the program here!